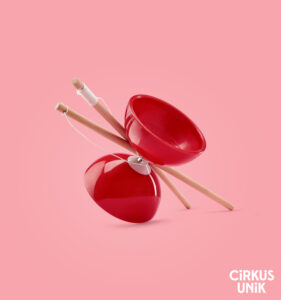 As a circus educator you get to meet many different children, all of whom have different characters and personalities. Some children have a value basis ​​that make them naturally respect us educators and their friends. Other children do not have the same basis.

One such child that I and my colleague struggled a little extra with is Iza. When Iza started practicing the circus, everything was a confrontation. She contradicted the teachers instructions, had a hard time listening and ended up constantly in conflict with her friends.

In the group that Iza joined, we often had to put the circus techniques aside for a while to devote ourselves to conflict resolution and group development. This is something that is part of our job, but in this group it was more evident. Iza was often one of those at the center of the conflicts. It was common for her to call her friends ugly words, make grimaces behind their backs or took to physical strikes. We circus educators constantly had a dialogue between us and often had discussions with Iza about her behavior. It went so far that she finally had to choose; quit the circus or stop quarreling.

After that conversation, we slowly began to notice a difference in Iza. She responded better and better to the arrangement of the circus lessons and took the liking to practice the circus.

During the Spring term 2020 we have been able to see a big change, not only in Iza but with many in the group.

I think the clear structure of the circus lessons has helped Iza to become calmer. The circus is often very clear and concrete; you have to put your hands in the right place on the trapeze, tense the right muscles in the handstand and concentrate while juggling, and I think it makes it easier for kids like Iza to focus on the right things. When Iza began to see what she could get out of the lessons, she put in more effort. The circus became important to her.

Today Iza works well in the group, they fight together towards their goals. Sometimes they fall back into old patterns and then we have to remind them of concentration and respect, but they make great progress.

* Iza is a fictitious name.