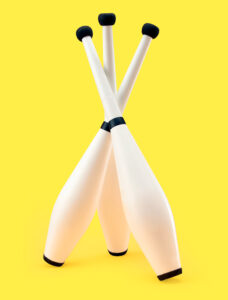 Circus educator Carolina says that student Kim started at Cirkus Unik with enthusiasm but with a confused picture of how to treat her classmates and teachers by gender.

Kim always had trouble interfering with the opposite sex and showed greater respect for teachers of the the same gender as herself.

A clear example was at the end of the classes when we always end in ring by holding hands to thank for the day, when Kim refused to hold hands with the opposite sex. It could take several minutes before it was possible to finish the class properly and to include Kim in the closing, which also affected Kim’s closest friends who gladly went in the same direction as Kim.

When we could start to notice a clear development in Kim, was when we introduced the value wheel. Kim then got a clear goal and wanted to achieve it together with her classmates. Kim herself took the initiative to help the group and also tried to get them in that direction.

This obviously affected the whole group as Kim is a person who likes to take space and is a role model for the others.

Kim began to show respect for both of her circus educators, who have different genders, and saw no problem collaborating with anyone in the group.

Admittedly, there are still some doubts sometimes with the view of the different sexes for Kim, but after going through such a huge transformation so quickly, there are clearly great opportunities for this student.

It is an honour to have been a part of Kim’s journey and to know that one has helped a little.

* Kim is a fictitious name